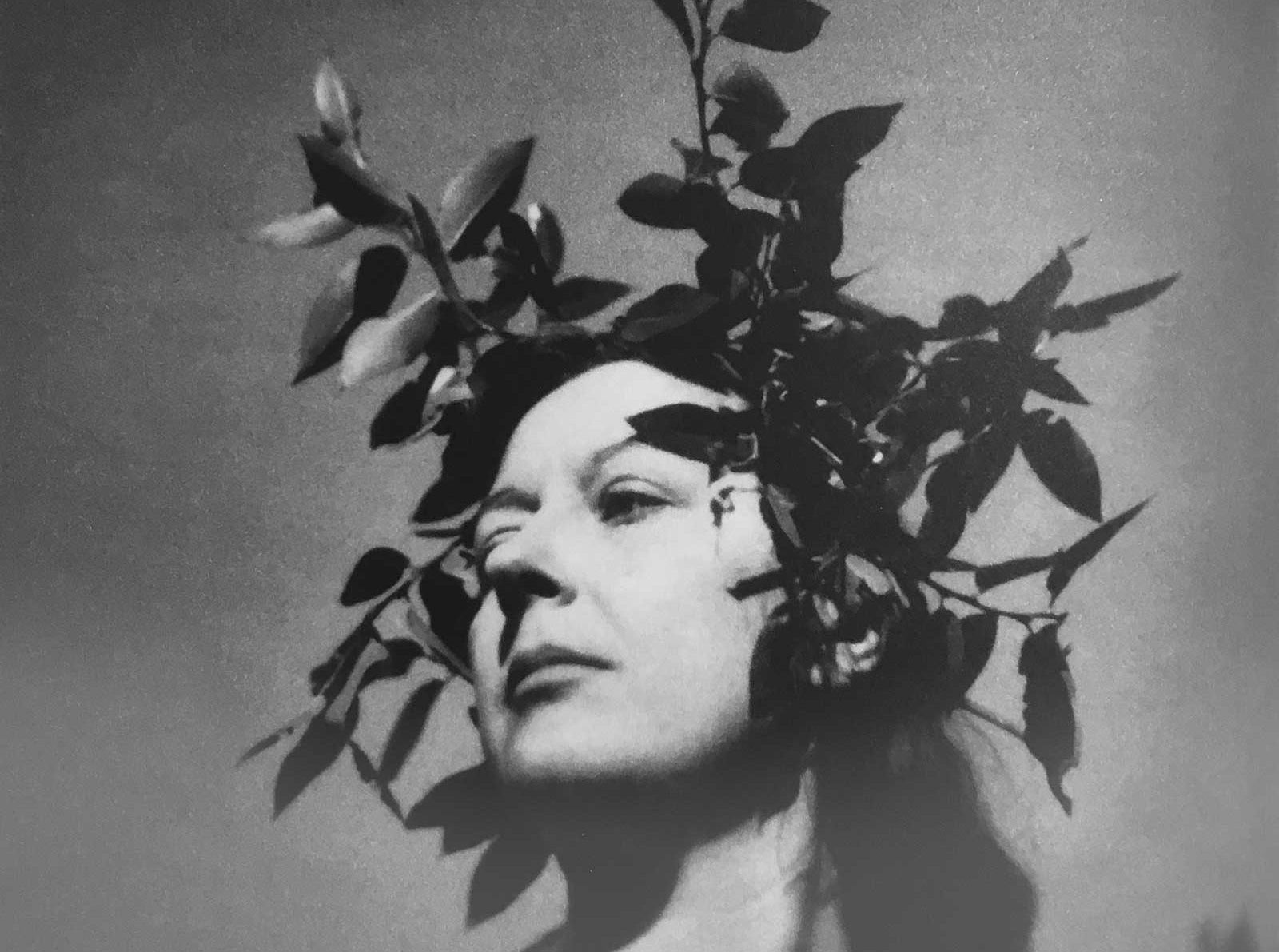 “Keep your eye on your inner world.”
—Dorothea Tanning

So Dorothea Tanning finds a temporary home at Tate Modern after years of relative neglect by the art establishment, a neglect which she may or may not have been partly responsible for…

Speaking of Max Ernst in her 2001 autobiography ‘Between Lives’, she said:
“He was as isolated as an unnamed island, unnamed because too far away from any other landmass, out of bounds.”

Was she referring to herself too..?

Dorothea was no lover of labels and neither was her creativity limited to canvas.

She sculpted and published poetry and prose in her lifetime but as a painter Tanning, evidently, was tied to Surrealism… by allusion, by association, by marriage… and stylistically there are certainly comparisons with the work of proto-surrealist Giorgio de Chirico…

But, ever the polymath, to this day there remains something homeless about Dorothea. To my mind it was the nature of her investigations that set her apart, which quietly, resolutely fashioned an oeuvre all her own.

I enjoy a restless spirit, and if my leaning here is more theoretical than art historical, this isn’t in order to place her in a different tradition, but to prise her free of such considerations altogether. While most current commentaries are attempting to reel her (back) into the art fold, to ‘place’ her, if we want to truly grasp this work we need to, at least attempt, push her further away…

The best art fails well, by striving for an outside it can never reach and Tanning’s ‘surrealism’ (ironically) succeeded because it pushed beyond surrealism. Dorothea’s work presented doors to be opened, thresholds to be crossed, literally and figuratively, not towards the light of truth but something unnamed, unnameable.

In our modern culture that has become obsessed with names, categories and destinations, the value of non-narrative, anti-narrative, and unknown journeys to unknown universes, feels compromised. For a while science fiction and fantasy (in film and literature) characterized our modern surrealism, but with the likes of Star Wars and Marvel paying perpetual lip-service to the holy grail which is the Hero Myth, these genres have become formulaic and shallow. The working out of a ‘truth’ wrapped in a proper name has trumped the freedom to be nothing (and everything). Identity has become an industry. ‘Right-thinking’ has erased the possibility of erasure, and in modern culture’s apparent zeal to ‘heal’, something feels broken. 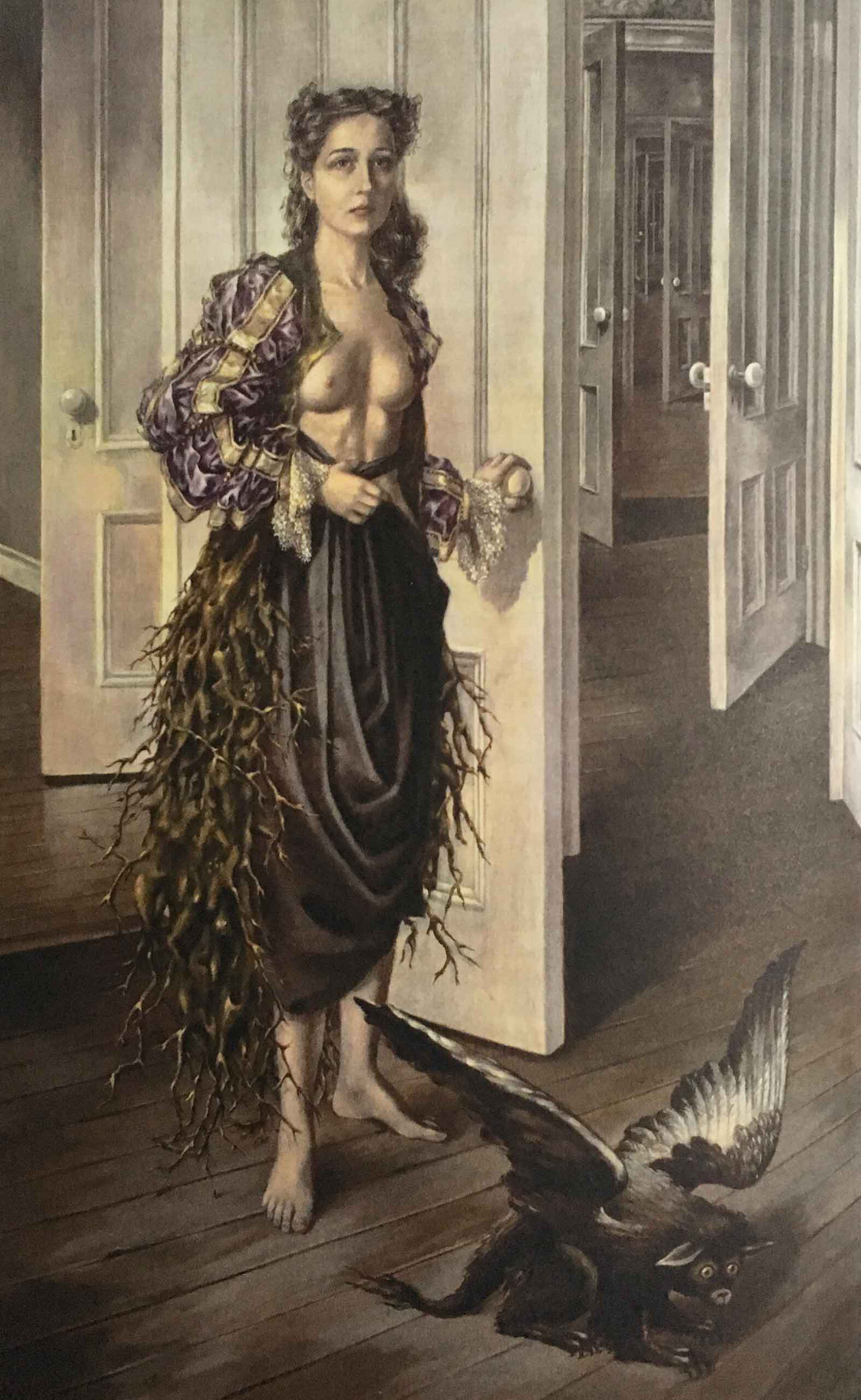 By contrast Tanning expressed a self not so much in crisis, as unformed. incomplete. Her early work presents a ‘youthfulness’ that borders something protean. The ‘girl-child’ is a repeating motif and Tanning’s girls, at some level, may represent an aspect of her past self, but they also exude something wholly other, almost supernatural. They are never victims but always complicit in the events depicted. More Sprite than Nymph they allude to something Dionysian. Their ‘incompleteness’ doesn’t contain the seed of their own potential wholeness but leads to something fragmented, multiple.

She came out of Galesburg, Illinois, a small town where “Nothing happens but the wallpaper.” And yet hiding behind that wallpaper… what magnificently tarnished walls must have lain hidden…

As an emerging artist she fell into a world broken and being broken by successive world wars, but a search for healing, or wholeness appeared to be the last thing on her mind… In Children’s Games two girls are hard at work stripping the walls of its wallpaper revealing strange, fleshy growths beneath, while ignoring the light at the end of the corridor. 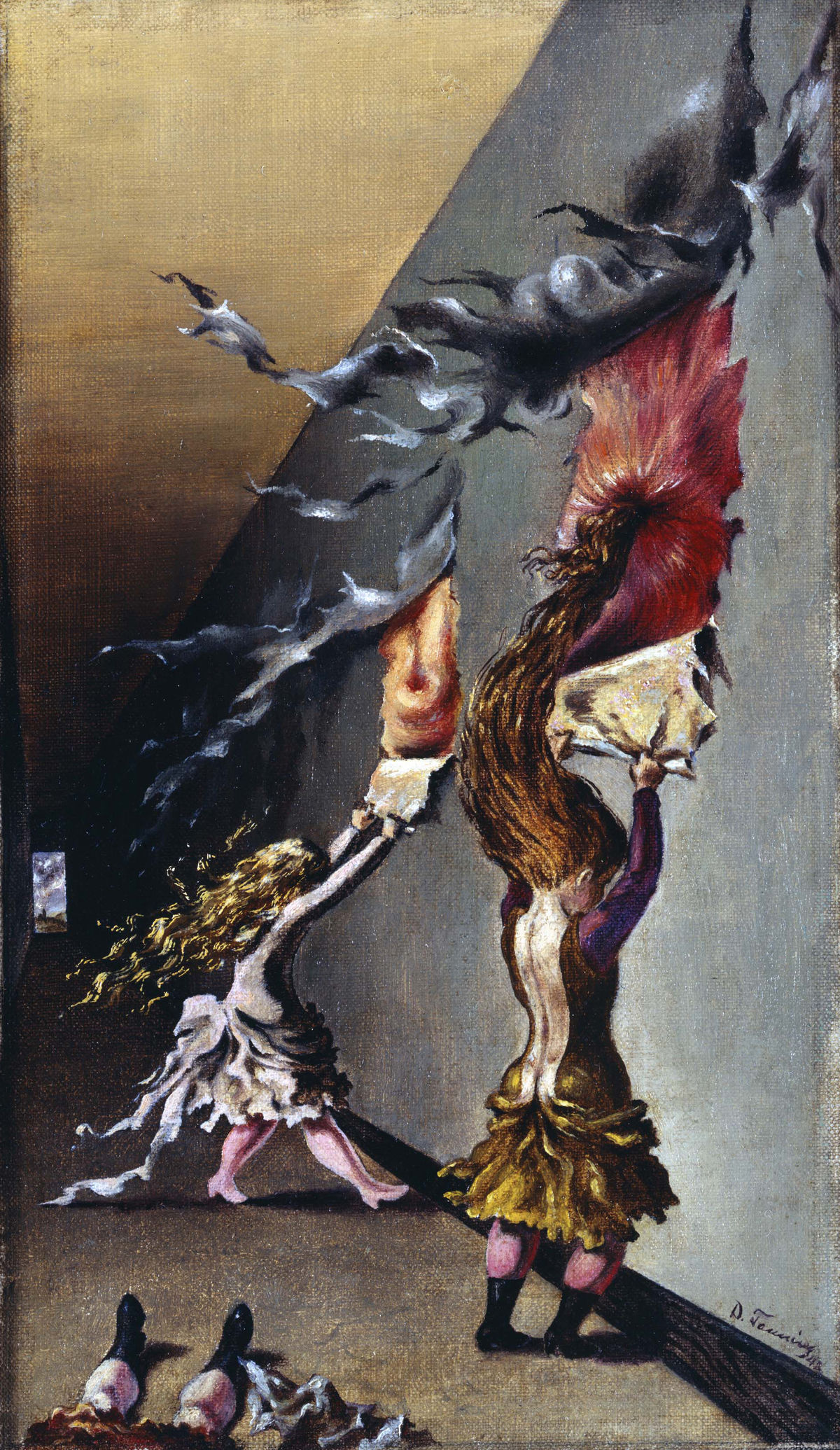 Sensible girls run for the exit but Tanning’s world is full of mischief, discovery and dark humour — her girls would never run, and if surrealism represented one thing it was the celebration of the freedom of error… to be wilfully ‘wrong-headed’… Tanning laughs while probing the unknown… surely the prerogative of childishness.

She wrote in her autobiography:
“So the beginning is an impossible place, as meaningless as that dot on my drawing in a class perspective lesson, the spot in the middle of the paper where all lines—roads?—came together at a place called Infinity. Only, supposing out of curiosity you tried to go there, you’d never make it. The spot would have gone […] It was a trick not only of the eye but of fate itself…”

Doors open to more doors. Tanning’s is a journey without beginning or end, without the promise of a utopia and this renders it dark… and nameless.

“It’s hard to be always the same person.”
—Dorothea Tanning

Tanning plays with self-identity without forming conclusions, doubtfulness, paradoxically, lives out in the open. The evocation of the enigmatic, the unknown, reveals a self ‘under erasure’ – there are no names, just openings, thresholds, desires…

I always found the ‘Breton Club’ a bit stuffy, too Freudian, scripted, too full of manifestos… which is why Tanning’s deviation toward something abject, something Bataillian, is wholly welcome and, even today, quite refreshing. I don’t subscribe to the idea that Andre Breton’s and Georges Bataille’s version of the surreal were mutually exclusive but her turn to ‘the formless’ evidenced by her paintings and sculptures from the 1960s and 70s, creates a sense of threat that doesn’t negate Breton’s ‘revolutionary love’, but calls into question the very subject/object division that would allow for it in the first place.

“In the first years I was painting on our side of the mirror, but I think I have gone over to a place where one no longer faces identities at all.”
—Dorothea Tanning

The paintings show fragmented figures occupying flattened surfaces. One of her under-appreciated strengths was an ability to appropriate stylistic trends. Technically these paintings flirt with abstract expressionism but without becoming embroiled in all that oily sweat and ego. Her unwillingness to fully abandon figuration would have set her against the prevailing trends which no doubt pushed her further from a mainstream heavily influenced, at that time, by the formalist modernism of Clement Greenberg. 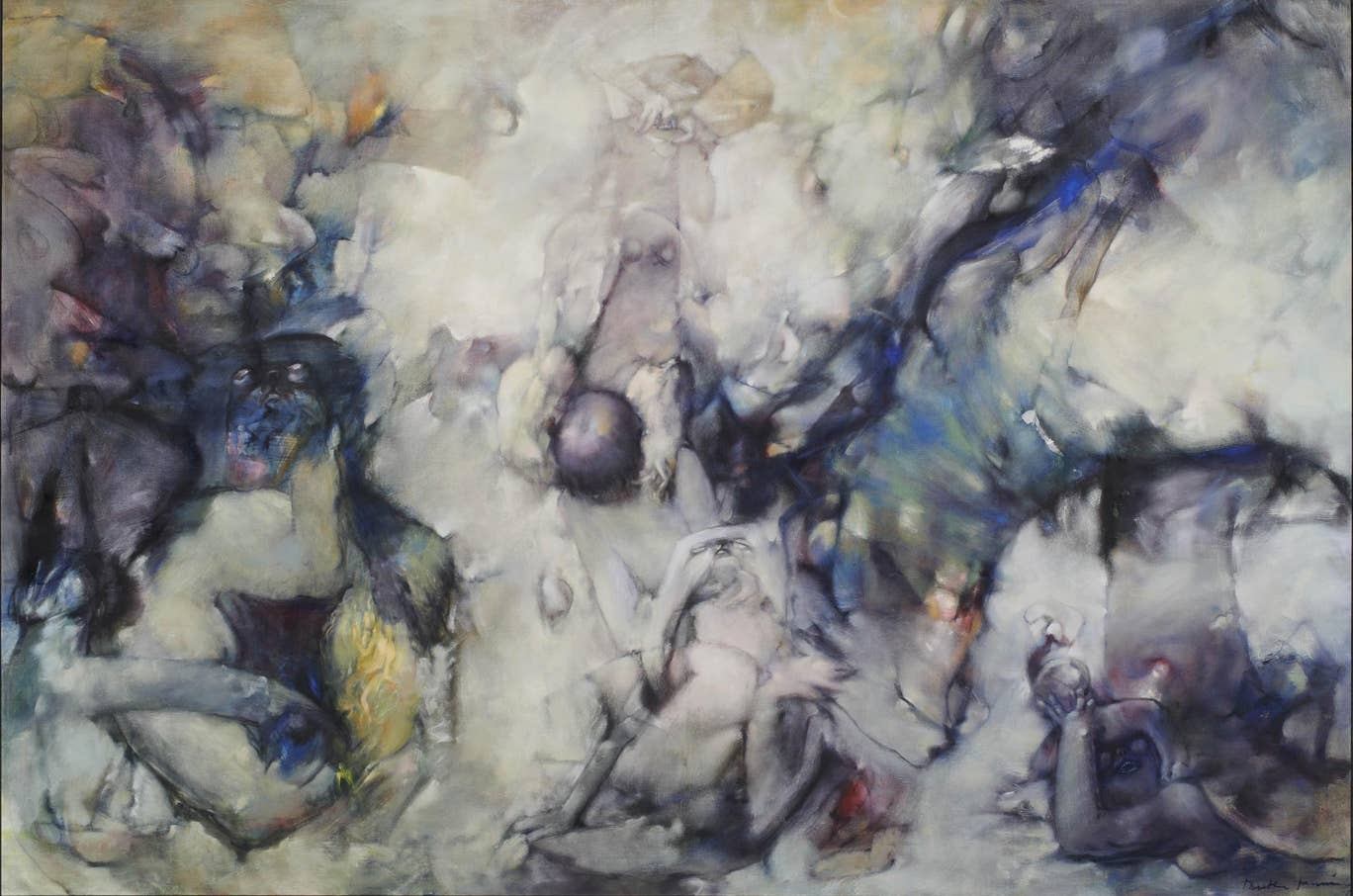 Similarly her ‘soft sculptures’ of the 60s and 70s have the anti-art feel of Dada while delivering something fetishistic. In ‘Pincushion to Serve as Fetish’, sex, shamanism and banality occupy the same space and reverberate ambiguously. There’s an almost ‘pataphysical joy in a meaningless totem armed with prickly meanings. 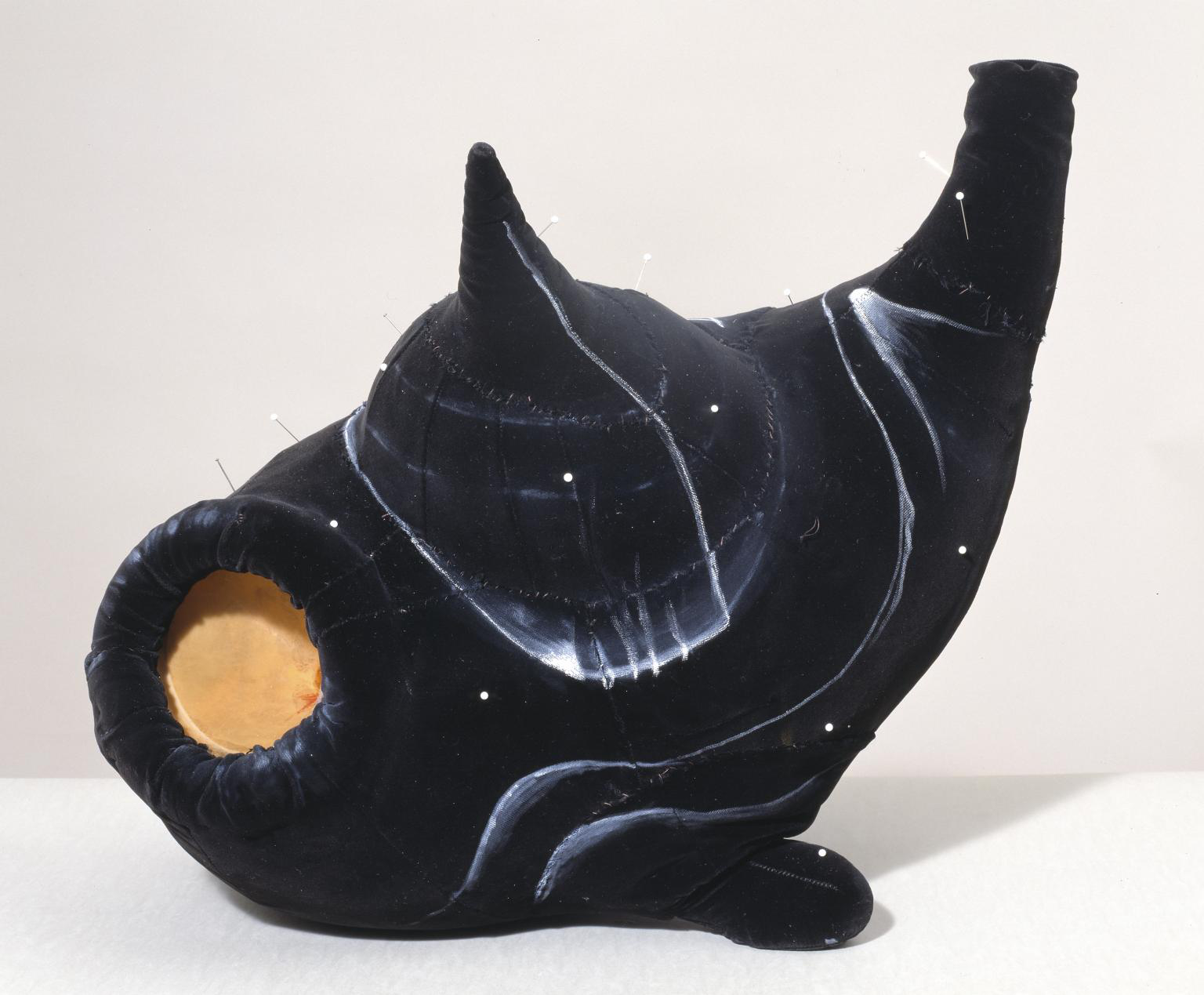 Pincushion to Serve as Fetish, 1965

She said: “This one was my bid for a statement of simple form, maybe not so simple, with its equivocal psychic suggestion – something I believe form cannot exist without. Not an image but bristling with images. And pins.”

Conceptually this was as playfully critical of modern culture as anything that emerged from Pop Art. Once again she was bucking trends this time by swapping her brushes for a sewing machine, but what came next took all that to the next level. ‘Hotel du Puvot, Room 202’ utilized her experience in set design and placed her amorphous sewn figures into a three dimensional habitat. As overtly Lynchian as anything in Eraserhead, she was years ahead of her time. The room creates its own ‘Twilight Zone’ and you know there is something unidentifiable lurking behind those walls, something that you, the viewer may well have brought along… 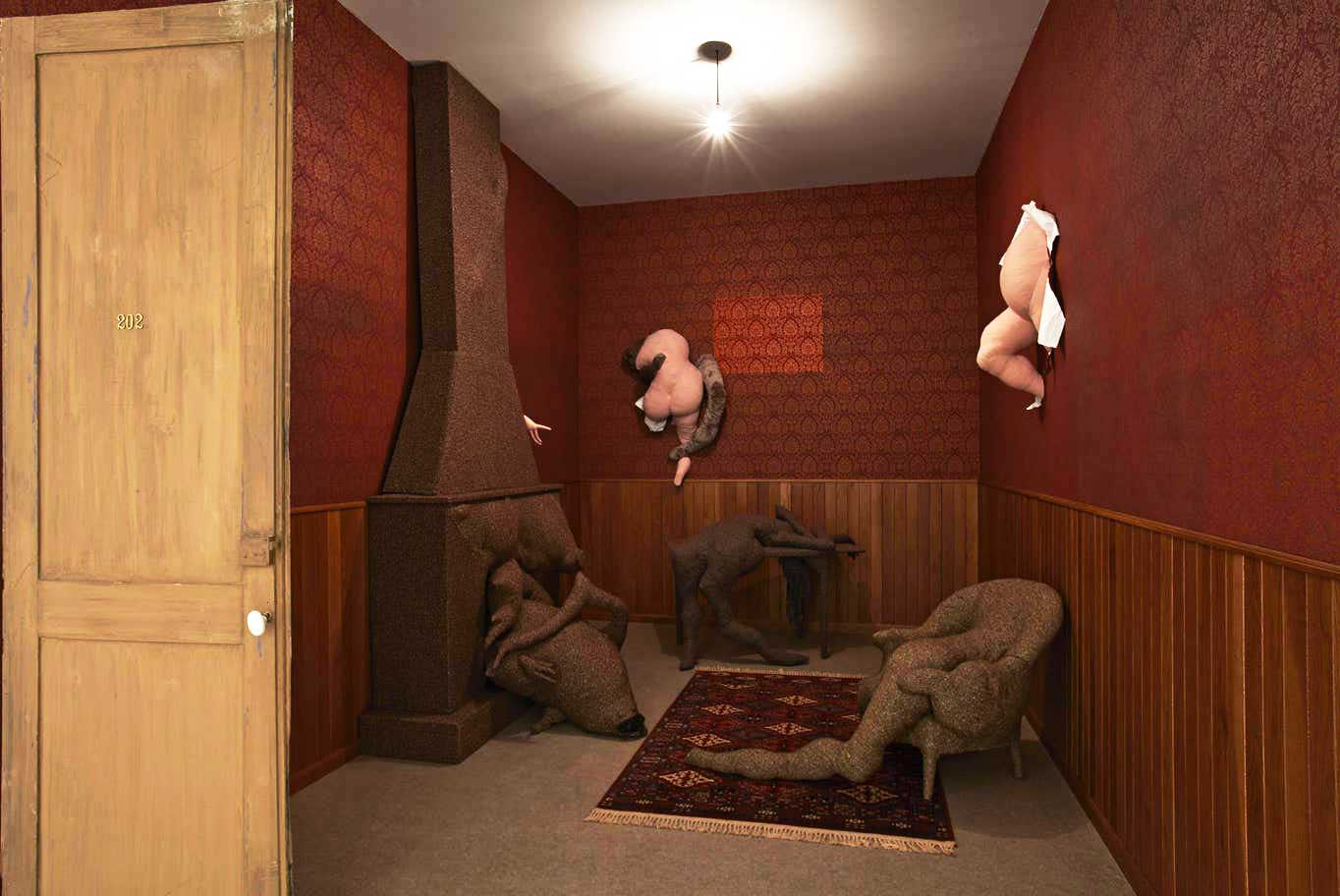 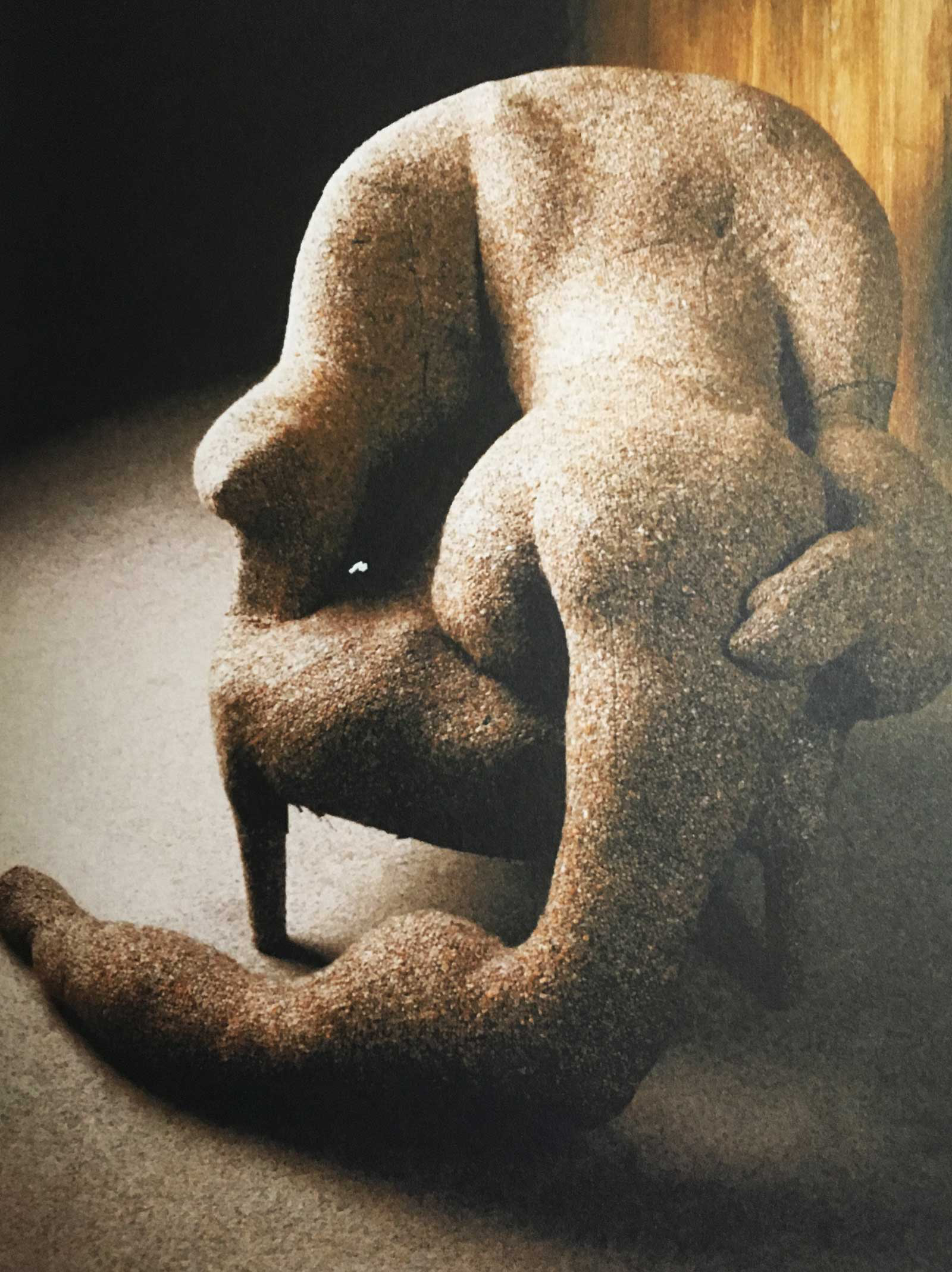 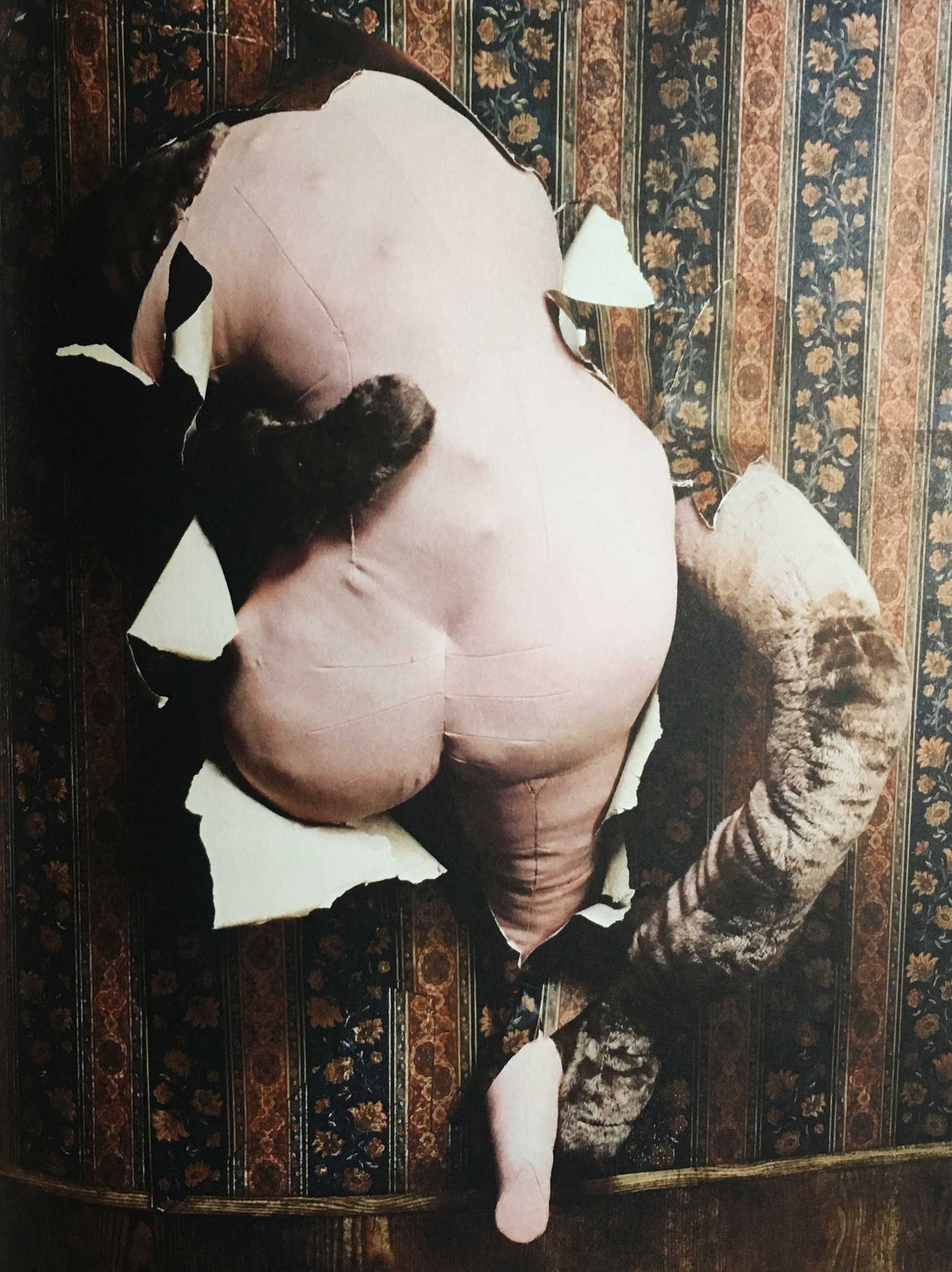 Taken as a whole her entire output flirts with something abyssal including her novel Chasm: A Weekend which grew out of a short story originally titled… Abyss.

Catriona McAra has argued in her ‘Surrealist Stratigraphy’ that, given she was writing and rewriting it over a period of years, the novel can be seen as a textual map of Tanning’s career. I wonder what Dorothea would have made of this..? There are many equivalences, not least the image of Destina, the strange girl-child, and endless doorways in a hotel-like mansion.

And yet Chasm is a story of unravelling, and descent. If it’s a map, it takes you to the edge of its world with a seven-year old girl as your guide. A child who has emerged from a distinct historical lineage but, having not yet accrued the baggage of adulthood, appears timeless.

“What is a friend for Destina? She knows only that enemies are those who have stopped being children.”
—Dorothea Tanning, Chasm

Tanning doesn’t tell me anything. She doesn’t instruct me, or debrief me, and she doesn’t attempt to repair me. She opens a door in the backside of my mind and invites me in. This is a service that’s largely absent in modern art practice…. the invitation to jump.

At the Tate Modern show once you get past the early ‘surrealism’ you find something altogether more interesting, more (and less) Dorothea. Even when she’s clearly picking up on painterly trends (which her longevity allowed for) she does it by her twisting her brush into her own wound, not the wounds of art history… there’s the working out of biography here, but also its shadow, its obliteration. I read a review that suggested she was angry at something… Well that’s not what I see here. The doors she paints are opening and closing the way doors ought, to achieve that sense of threshold, but they also to evoke time in a timeless place. This is an art that chases down the impossible and inevitably fails, but with that special sense of failure that equates to a promise…

I contend that Dorothea Tanning strikes a chord for our present day by mirroring our evolving disorientation. She navigated an abyss and her outsider voice evoked a namelessness that reminds us of our own exile.