“Crows feet are ingrained in my face, and I’m living too late.”
—Mark E. Smith

While his punk and post-punk contemporaries disappeared into irrelevance or became property speculators, Mark Edward Smith remained resolutely in a self-made ‘interzone’, throwing bottles at Mumford And Sons, pissing in buckets at the ICA and intimidating interviewers the length and breadth of this green and often unpleasant land…

The time of The Fall is over. Quite possibly in more ways than we’re ready for…

We haven’t lost a rock star we’ve lost something far more potent – an idea – and it’s a heavy loss.

Or maybe you thought this was all about rock ‘n’ roll with attitude..?

And what ever happened to that..?

“This is the home of the vain!”

The world has moved on since rock ‘n’ roll was last associated with rebellion. Rather suddenly we’ve progressed, and we have a fully developed progressive soundtrack… You don’t need attitude when you have Spotify, The Brit Awards and Ed Sheeran.

We seem to have drifted into the green room of a never-ending awards ceremony, the greatest hits of the history of rock, on autoplay.

The Jules Holland show. ’40 Years of Punk’. Tribute Acts, band reformations, covert and overt plagiarism, and the living corpse of the 60s that is the Rolling Stones…

Rock’s resumé or its epitaph?

The disappearance of Smith has coincided with ‘co-in-cidence’; the digital age has given us instant access to everything — no more teenage journey of discovery, no obscure musical rabbit holes.

Hit the subscribe button… the rock ‘n’ roll outside is now a fully commodified inside.

The party at the end of time has not so much forgotten its blues roots as cut them out of the ground. Mass entertainment has been incorporated into the industry of distraction. Music, or the spirit that used to drive it, has ‘horizontalized’, everything is permitted, it’s now OK to like what your dad likes…

“This is the winter of your mind”

Mark E. Smith provided an antidote to a decline he began documenting in 1978.

He remained forever ‘out of joint’. Contrarian to the core, you could argue that he trod a path between extremes. You could also argue that such a flatly unimaginative concept as ‘path’ would never have occurred. More likely his mission was to destroy all paths.

In one sense at least, Smith’s departure feels timely. As pop/rock modernism morphs into its own monument, the idea of an ‘outside’ is feeling rather quaint. The cracks in our minds are slowly being papered over with options. When all possible choices lie before you, you don’t much need to think… this is a ‘country on the click’.

To many commentators we’re in the midst of a culture war but Smith’s whole career was wrapped up in a war on culture. He provided a diagnosis of modernity from within modernity, without being distracted by ‘postmodern cool’. Not for him the “self-satisfied, smug” of ironic detachment. “The Talking Heads are the enemy” he once said. Smith’s irony frequently followed through into a vicious sarcasm. He never made things easy for you or himself, and he’d often fail. But that was a part of it.

The Fall ‘circus’ was its own version of a Theatre Of Cruelty and was equally flawed, but how else could it operate..? How else would he surprise himself, and us..? And how else could the outside gain entry..?

The consummate professional layman, the ‘bloke down the pub’ created a totally unique prole-art threat that would undermine any attempt at categorisation or appropriation. There are no Fall clones.

“I don’t love you and I never did”

“Always different, always the same.” Said DJ John Peel, though “always inside, always outside” was, perhaps, more fitting. His stance and behaviour saw him forever lurking at the exit door of cultural acceptance. The Slang King assumed his position the moment it was abdicated by Johnny Rotten, about five minutes into his reign…

The tributes to Smith have come from all sides including extended features on BBC Newsnight and Channel 4. This would never have happened earlier in his career but the media establishment has recruited wisely over the years. Liberalised, and riven with the widely-read and well-intentioned it appears intent on weaving ‘The Fall Group’ into a general nostalgia for pop modernity, propping up its self-importance in the process and, Smith would certainly have argued, distracting from its distinct lack of imagination.

Of course, Smith would curl a lip at all this, he’d give me that look…

I met him after a gig once. I was shamefully drunk, acting up backstage, and having a lively chat with one of his exes. He didn’t appreciate my conflation of The Fall with the ‘transgressive surrealism’ of Georges Bataille, even though his mocking half-smile (and my inebriation) convinced me I’d scored some kind of a hit…

“The need to go astray, to be destroyed, is an extremely private, distant, passionate, turbulent truth.”
—Georges Bataille

The Fall made an abject racket. An insult to the ear or, to the many, simply an insult. You felt the driving bass was either rushing away from or towards something abyssal.

The cut ups, the ‘pataphysics, the strangeness, the aggression… a barrage of noise and roughly hewn imagery that, to the initiated, made perfectly imperfect sense. You either got the Fall or you didn’t but what you never tried to do was to explain it.

Not knowing was, and remains, a part of it. The mystery that endures opens a door to the backside of your mind… The possibility of something and nothing.

Mildred: “Hey, Johnny, what are you rebelling against?”
Johnny: “What’ve you got?”
—The Wild One

Ever since Marlon Brando and James Dean, ‘attitude’ has flirted with nihilism. The possibility of absurd outcomes, nothingness, collapse… Rock ‘n’ roll culture, as a theatrical illusion of the outside was one of modern society’s safety valves. Whether it fuelled catharsis or bolstered identity it was that Dionysian moment of release that held the system together. Smith explored the illusion with a prescient eye…

He pushed every assumption to its limit, and beyond. The drugs, the break-ups, the snarl, the lyrical obfuscation. The apparent meaninglessness traced a path around the nihilist jaws that have been snapping at our age since the death of God.

When progressives appropriated and rebranded the outside as a new inside, something was lost… Modern liberalism hasn’t just closed the door to this outside it’s started to deny its existence. When Grime wins awards the ‘artist as outsider’ moves closer to self parody and when left wing politicians turn up to gigs, en masse, with mutual admiration in mind something feels broken.

“This the rank posturings and insights of the unutterable”

But transgression, as a ‘will-to-nihilism’ will always find a way back in. Accordingly, an increasingly intolerant modern outrage culture has appeared on social media, and it’s taken a Right turn against the establishment.

When the Right claim ‘freedom of speech’ and delight in a revolt against Political Correctness and perceived Left self-righteousness, ‘Who Makes The Nazis?’ again, becomes one of the questions of our age.

There’s no turning back now but we need a new concept of fallenness or we risk opening a back door to a new kind of ugliness. In the same way that J.G. Ballard examined extreme violence to trace its limits and grasp its internal logic, Mark E. Smith, the supreme anti-ideologue, pushed absurdity and ugliness to its ends and one day disappeared over its edge.

Who will continue this work..?

We’ll miss him because we need him but the sad fact is that he no longer needs us.

“He is not appreciated” 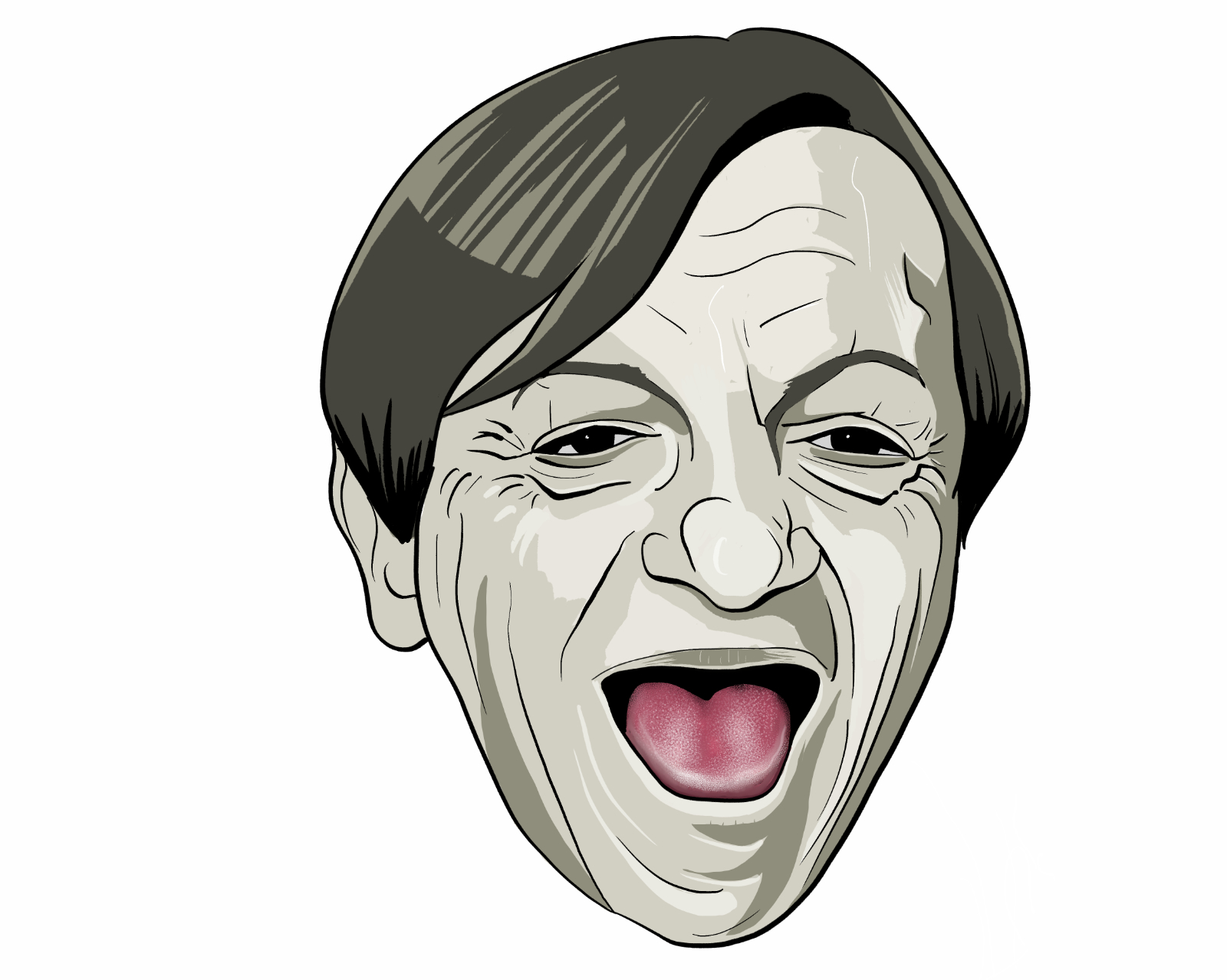 This article first appeared on The Dystopian.